Music of the Sun 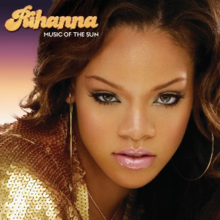 Music of the Sun is the debut studio album by Barbadian recording artist Rihanna. It was released by Def Jam Recordings on August 30, 2005. Prior to signing with Def Jam, Rihanna was discovered by record producer Evan Rogers in Barbados, who helped Rihanna record demo tapes to send out to several record labels. Jay-Z, the former chief executive officer (CEO) and president of Def Jam, was given Rihanna’s demo by Jay Brown, his A&R at Def Jam, and invited her to audition for the label after hearing what turned out to be her first single, “Pon de Replay”. She auditioned for Jay-Z and L.A. Reid, the former CEO and president of record label group The Island Def Jam Music Group, and was signed on the spot to prevent her from signing with another record label.