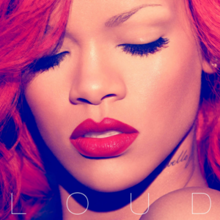 Loud is the fifth studio album by Barbadian recording artist Rihanna. It was released on November 12, 2010, by Def Jam Recordings and SRP Records. It was recorded between February and August 2010, during the singer’s Last Girl on Earth Tour and the filming of her first feature film Battleship. Rihanna was the executive producer of Loud and worked with various record producers, including StarGate, Sandy Vee, The Runners, Tricky Stewart and Alex da Kid. The record features several guest vocalists, including rappers Drake, Nicki Minaj and Eminem, who is featured on the sequel to “Love the Way You Lie”, titled “Love the Way You Lie (Part II)”.