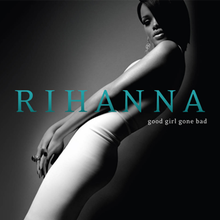 Good Girl Gone Bad is the third studio album by Barbadian recording artist Rihanna. It was released on May 31, 2007, by Def Jam Recordings and SRP Records. Rihanna worked with various producers on the album, including Christopher “Tricky” Stewart, Terius “Dream” Nash, Neo da Matrix, Timbaland, Carl Sturken, Evan Rogers and StarGate. Inspired by Brandy Norwood’s fourth studio album Afrodisiac (2004), Good Girl Gone Bad is a dance-pop, pop and R&B album with 1980s music influences. Described as a turning point in Rihanna’s career, it represents a departure from the Caribbean sound of her previous releases, Music of the Sun (2005) and A Girl like Me (2006). Apart from the sound, she also endorsed a new image for the release going from an innocent girl to an edgier and more sexual look.